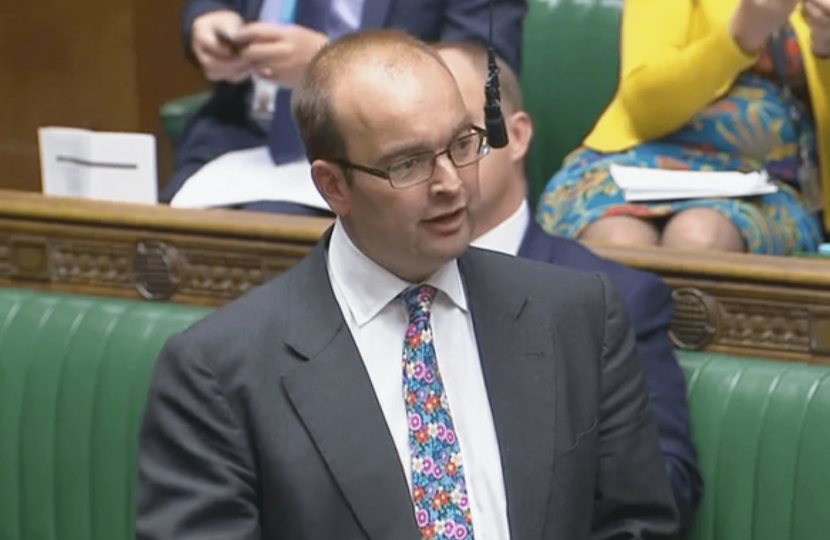 Local MP James Duddridge Member of Parliament for Rochford and Southend East calls for harsher chargers for Travellers and Gypsy Populations who are repeat trespassing offenders in Southend, in a debate with Alok Sharma Minister of State for the Department for Communities and Local Government

Yesterday (Monday 9th October) James Duddridge Local MP for Rochford and Southend East and other Essex MPs participated in a 3.5hr government debate in the House of Commons on Travellers and Gypsy population in the county.

Like other Essex MPs Mr Duddridge has received numerous complaints from constituents about travellers and Gypsy populations. Especially around trespassing by travellers in Gunners Park in Shoeburyness which recently hosted the Tower of London poppy display.

James is disheartened to know that a number of visitors to his constituency came to see the poppies and then saw first-hand the anti-social behaviour caused by travellers. James believes that such behaviour is damaging Southend’s reputation as a great tourist destination, and in turn hurts our local economy as people choose not to return.

Although Southend Borough Council are excellent at handing legal notices to travellers it seems currently the law favours the travellers who simply pack their bags and move to another area of the town such as Trinity Football Ground or Priory Park.

“I know that in today’s debate we will hear accounts of the damage left in the wake of illegal encampments and a call for local authorities and the police to do more and to move faster in dealing with them. Indeed, many Members have written to me highlighting the impact illegal incursions have on their constituents. I recognise, as I am sure the whole House does, the huge sense of frustration and anguish about the issue that many people feel.”

“I personally am not tolerant. My constituents are not tolerant. When Gunners Park was littered, when Trinity football ground was paved over with a travelling community, and when Cherry Orchard Park was invaded, my constituents were not tolerant. Can we have a three strikes and out rule? These people have expensive land cruisers and big trucks. If they park on council land or private land more than three times, may we give the police the power to take those assets and sell them for the good of the community and to clear up some of the mess that is left behind?

“My hon. Friend expresses a view that many colleagues will have experienced in terms of the frustration felt by their constituents. Let me talk about the powers the police have and about what we intend to do. As I said, many Members have written to me highlighting the impact illegal incursions have on their constituents. I recognise this huge sense of frustration; indeed, I share it. In recent months in my constituency of Reading West, we have had numerous illegal encampments set up on public land, including nine separate visits to Prospect Park in Tilehurst. These incursions have caused my constituents significant distress, as each leaves behind enormous amounts of waste and cleaning comes at a considerable cost to the law-abiding taxpayers. We all aspire to peaceful and integrated co-existence between communities, where we all share the same rights and responsibilities, but there is a perception among the settled communities—our constituents—that the law does not apply equally”

I wasn’t expecting to spend 3.5 hours watching last night’s Gypsy Traveller debate but I did. I know from the comments from farmers and surrounding communities when I have been out on site that this has become a really stressful occurrence for many. So to see such a strong commitment from Essex MPs was most impressive. At one point there was almost an entire bench from the County and all speaking with sense, passion and providing constructive ideas to move things forward.

On behalf of the farming community I would like to thank you all for your support and commitment to bringing change to this frustrating, costly and often menacing situation.  We will certainly let farmers know you have been listening and speaking out on their behalf.”

My Column in the Southend Standard