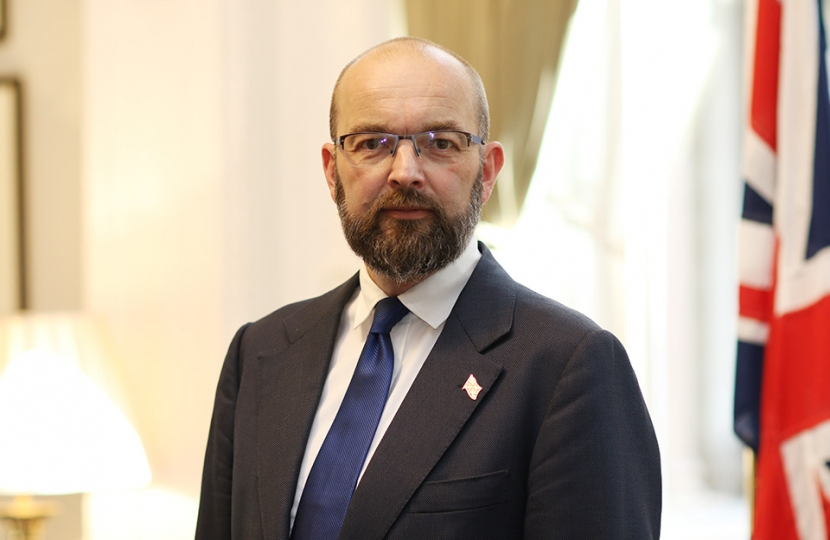 “I am enormously proud to be recognised for my work in Rochford and Southend East as a Member of Parliament for seventeen years and as a Minister.

“It is a particularly great honour to be made a Knight Commander of the Order of Saint Michael and Saint George. It will be a great surprise to people who knew me before I stood for election!

“I can assure my constituents that I will not follow Sir David’s shining example, riding through the streets of Southend on horseback in armour, unless you insist!

“As a knight of the realm, at the relatively young age of fifty-one, my work continues, and I look forward to continuing to serve the people of Rochford and Southend East.”

Sir James Duddridge KCMG, Member for Rochford and Southend East has been honoured for his political and public service to the United Kingdom as a Knight Commander of the Order of Saint Michael and Saint George, KCMG.

The Most Distinguished Order of Saint Michael and Saint George was formed in 1818 and is listed as the sixth-most senior chivalric order in the British honour system as outlined by Burke's Peerage and Baronetage. The Foreign, Commonwealth and Development Office is responsible for nominating individuals for their distinguished and loyal service to our nation’s foreign and commonwealth affairs.

Sir James has served in roles across government, as the current Minister of State for International Trade, and former appointments as Minister for Africa in the Department for Foreign, Commonwealth and Development Office and Minister for Exiting the European Union. Additionally, Sir James has served as a Lord Commissioner of HM Treasury twice. Sir James also served as the Parliamentary Private Secretary to the former Prime Minister, The Rt Hon Boris Johnson MP, until July this year.

Outside his ministerial roles, Sir James has chaired a number of select committees in Parliament. He additionally served as the Chairman of the Parliamentary Commonwealth Association UK Branch from 2017 to 2018, where he sought to promote sustainable development and poverty reduction goals through parliamentary diplomacy and parliamentary strengthening activities.

On Tuesday 8th November 2022, the Boundary Commission for England published its Revised Proposals for consultation for the upcoming 2023 boundary changes.