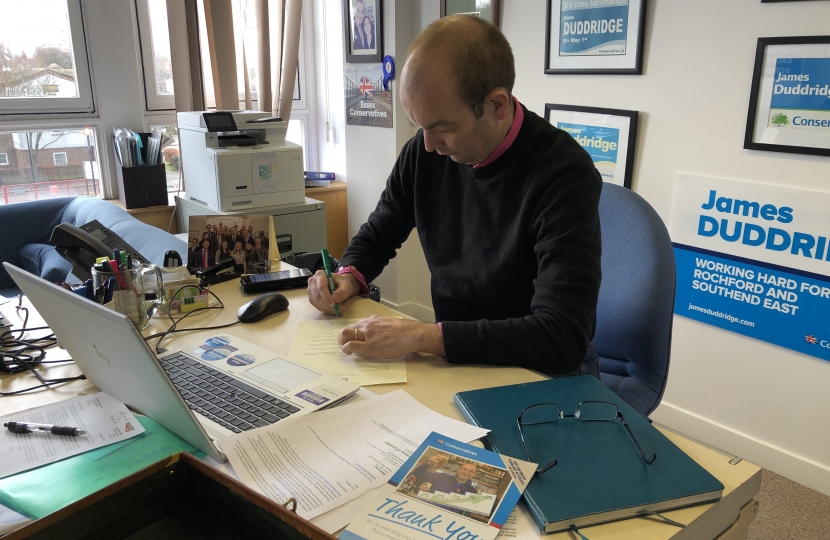 James Duddridge MP has bid farewell to the Department for Exiting the European Union after helping to successfully deliver Brexit.

In a letter to Boris Johnson, the MP for Rochford and Southend East thanked the Prime Minister and described his time in the role as an “unforgettable experience”.

He will now return to the backbenches after the Government’s Brexit department closed on Friday night – the moment the UK left the EU.

James was appointed as a Parliamentary Under Secretary of State at the department in July and guided the historic EU Withdrawal Agreement Bill through Parliament.

“On this historic day for the United Kingdom, I write to formally confirm my resignation as Parliamentary Under Secretary of State for Exiting the European Union effective at 11pm 31st January 2020.

“I am grateful for having been given the opportunity to serve as a Minister. The Department has achieved its purpose and today we finally deliver on the result of the 2016 referendum and leave the European Union.

“Walking through the gates of Downing Street every day on the way to work has been an unforgettable experience. It has been a privilege to serve alongside Steve, who has been a star.

“I have enjoyed working across government as Bill Minister for the Withdrawal Act, defending the government at frequent urgent questions, attending XO [Exit Operations] and assisting David Frost and your team at Number 10. We got it done.

“As ever I will serve the government from the backbenches with as much vigour as I did from the front bench, albeit, hopefully only for a short while!

“Keep up the good work. We have the momentum and the mandate.”