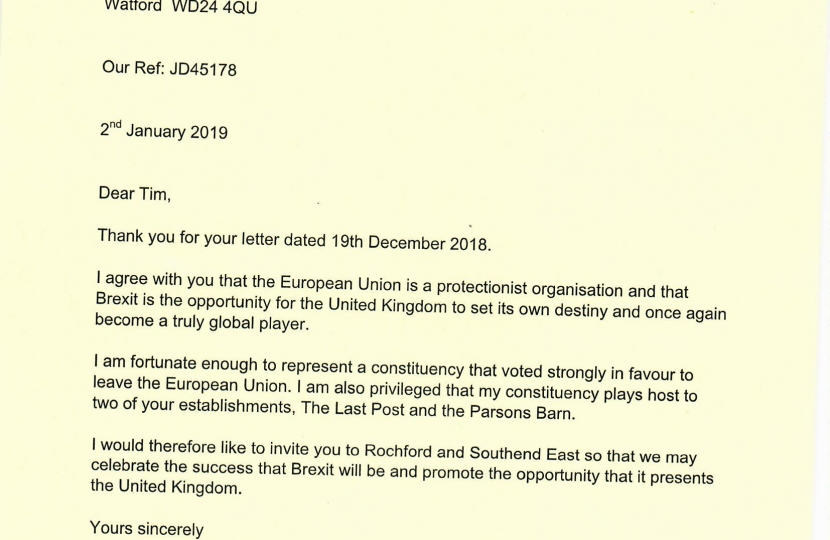 James Duddridge, Member of Parliament for Rochford and Southend East, has written a letter to the Chairman of the Wetherspoons chain of pubs, Tim Martin, to celebrate the United Kingdom leaving the European Union.

In his letter which was a response to one received from Mr Martin, James agreed with the publican that the European Union was a protectionist organisation and that Brexit gave the United Kingdom an opportunity to once again become a global power.

On this point James said,

"The United Kingdom has always been a global player when it comes to free trade. We were once great pioneers of the open sea trading all around the world freely with our commonwealth allies who we share a common language and shared values. This in turn bought prosperity to the United Kingdom and the world as a whole."

"However, since joining the European Union we have had to obey by a common set of rules including only trading freely with the 27 EU states and those they make agreements with. As each agreement requires all 27 states to agree, who  these trade deals take an embarrassingly long time to be agreed. As such Britain's burning desire to be a great global trading nation has been repressed."

"Brexit  allows us to once again be free of the chains of European Union bureaucracy. It allows us to indiscriminately sign trade deals around the world with great global economies such the USA, India, Canada, Australia and New Zealand. Countries that we share common values and language with, making life for businesses even greater. We can then strike a free trade deal with the European Union just like Canada has done to trade freely with them."

James, a Conservative party loyalist who has previously served as a Government Whip and Minister within the Foreign  and Commonwealth Office has been very open with his opposition to the Withdrawal Agreement currently being proposed by the Prime Minister. He recently held a survey of constituents which suggested that 85% of constituents agreed that they did not support the proposed agreement.

"This deal clearly does not have the support of the constituents of Rochford and Southend East, and does not deliver the Brexit that they voted for."

"It keeps us indefinitely locked in the Customs Union, unable to make our own trade deals and so unable to become the truly global trading player that we aspire to be. It force us to pay £39 Billion to the European Union without receiving any benefits in return, and it threatens the very existence of our Union by putting a border in the Irish Sea."

"I once had hope that our Prime Minister would be capable of delivering the Brexit that would see the United Kingdom prosper free from the clutches of a federalist Union. That hope has now gone, and is it time to consider the other option to move onto WTO rules and deliver the Brexit that was promised. Not to deliver a half in half out compromise which only delivers the worst of both worlds."