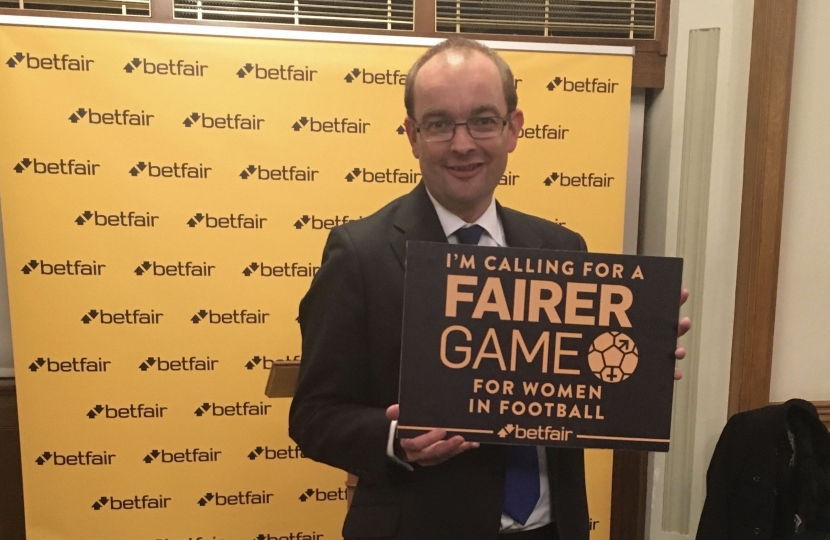 With a lot of inspiring people and organisations coming in ot brief MPs in the House, it is often difficult to find time to attend all these events.  That being said, I was glad I could attend the Fairer Game reception held by Betfair.

Rachel Yankey OBE (Former Arsenal and England player) and ambassador for Betfair's Fairer Game said: "This campaign is a huge leap in the right direction for women in football and I am really excited to see so much positive support from MPs for such an important issue.  The 50 women who were selected are a real credit to women within the industry and their drive and determination to succeed is truly inspiring."

It was great to find out that our very own Rochford and Southend East resident, April Smith, who works at Southend Football Club, was one of the 50 coaches Betfair is funding to complete their UEFA B licence, with the long-term goal of increasing the number of women at the top of the coaching pyramid.

It was a pleasure to meet April and to hear her story but most importantly to hear about the fantastic things the club is doing to encourage girls in and around Southend and Rochford to get involved in the sport.

In her role as Women's and Girl's Development Officer for Southend United U18 girls, she has been part of the team responsible for setting up eight grassroots teams including a newly-appointed ladies team over the last three years.

I believe that we all have a duty to challenge the gender disparity for women in sport and not just football.  I wholeheartedly support this initiative to level the playing field for women in football and in sport more generally.  We still have a long way to go but this is a huge leap in the right direction.