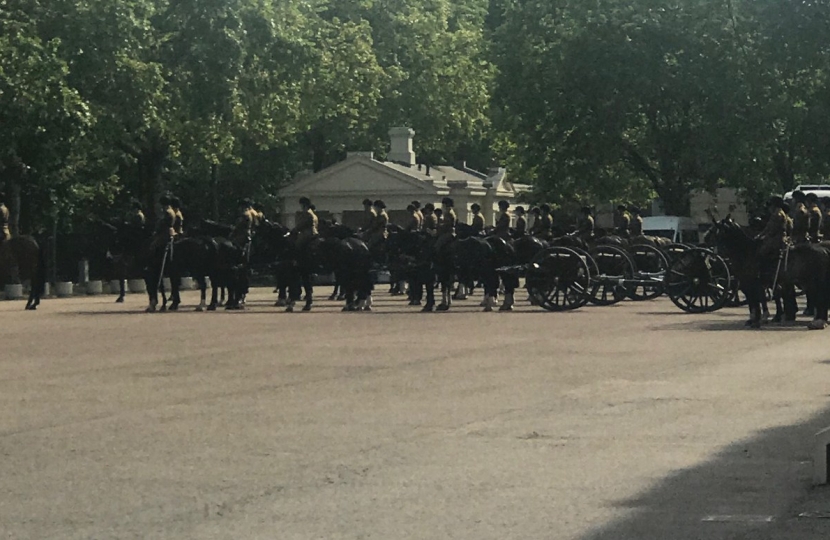 James Duddridge, the Member of Parliament for Rochford and Southend East, experienced first-hand life of a Queen’s Guard soldier during a fascinating visit to Wellington Barracks.

The world-famous Queen’s Guard are the soldiers responsible for guarding the official royal residences in London.

They also conduct the Queen’s Birthday Parade and Trooping the Colour.

And as part of James’ involvement in the Armed Forces Parliamentary Scheme, he spent the morning shadowing preparations of the Queen’s Guard on Thursday (23rd May 2019).

Part of the tour saw the Conservative MP visit the Kings Troop Royal Horse Artillery in their stables, speaking to soldiers, looking at gun carriages and horses.

He also met with the Guardsmen as they prepared kit in their accommodation before witnessing a full run through of the Queen’s Birthday Parade.

Speaking after the visit, James said:

“Many people will have seen The Queen’s Guard when visiting places such as Buckingham Palace or St James’s Palace.

“Apart from being popular with tourists, they are combat soldiers who carry out incredibly important work.

“It was fascinating to go behind the scenes at Wellington Barracks and see for myself what it takes to be part of the Queen’s Guard.”