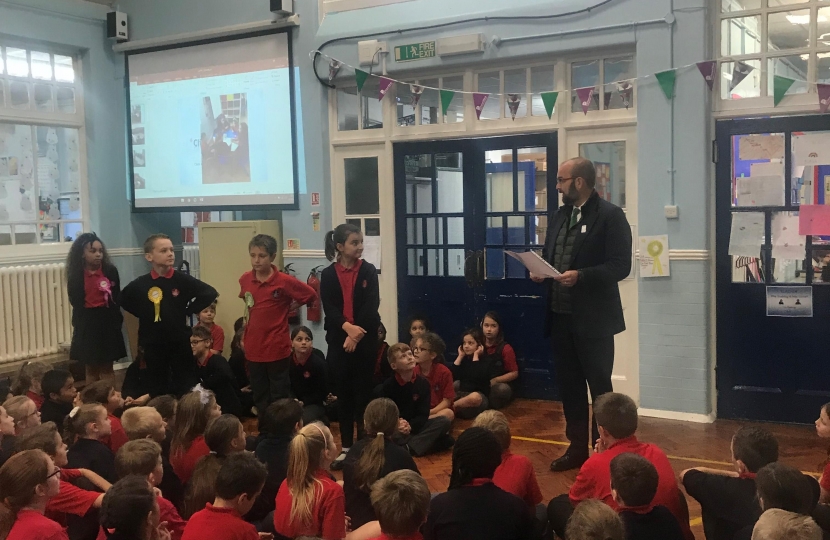 James Duddridge, Member of Parliament for Rochford and Southend East, has announced the winner of Bournemouth Park Academy's mock election as a part of their celebrations for Parliament Week.

Through last week students of Bournemouth Park Academy, with the help of the Office of James Duddridge MP, have been holding a mock General Election. Over the week 20 students were chosen to be a part of four different political parties; Progress, Tomorrow, Transform and Vision. Each part had a party leader who was the candidate to become the Member of Parliament for Bournemouth Academy.

Throughout the week the 4 parties created policies, designed political literature and took part in a debate about how they would improve their school. On the Thursday all of the Key Stage 2 pupils voted in a secret ballet to elect their new Member of Parliament who would work with the teachers to implement their policies.

On Friday James Duddridge visited the school to announce the winner.

The election was very close with couple a couple of votes in it. However, after the votes were counted by other pupils the Tomorrow Party was victorious.

"Well done to the Tomorrow Party of their victory."

"This election was an excellent way for the children of Bournemouth Park Academy to learn about Parliament and how democracy works. It was great to see how excited they were to get involved in a democratic process and this showed in the election posters they created."

"I look forward to joining them again."

“UK Parliament Week gave us at Bournemouth Park Academy an opportunity to teach children about voting, elections, the processes and structures involved in government and how to treat each other with respect. The children thoroughly enjoyed using their votes for a real cause and getting behind the parties. What a fantastic week!”