Exiting the European Union and Global Trade: James makes a speech during the debate on refreshing relationships with the Commonwealth 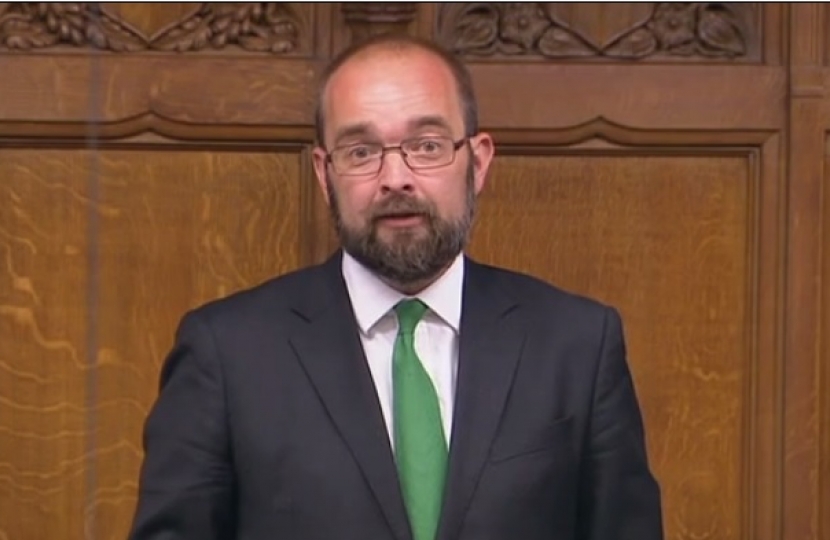 I will shock the Front Benchers by saying that I agree with absolutely everything the hon. Member for Bishop Auckland (Helen Goodman) said—about my hon. Friend the Member for Hornchurch and Upminster (Julia Dockerill), who is indeed truly fabulous. Hon. Friends and new friends, we all cuddled around her in what is now known as doughnut. I am used to being part of a doughnut, but never before have I been called a penguin. None the less, I have waddled back to my usual place and am happy to have caught your eye in this Brexit debate, Madam Deputy Speaker.

I am proud to have supported Brexit. Although there were many reasons to support Brexit, and for many of my constituents the principal one was about taking back control of our laws, mine was a different one—the economic future of Britain. Before being elected to this place, I was a banker in Africa and the City. I ran banks in various African countries, and I saw that the backbone of those countries and the banks was commodities and trade in goods. I therefore have some experience with trade finance, letters of credit, debt financing, raising finance, export guarantees and doing business and trading across different territories. As such, I think it is quite good that this Parliament is not to be jam-packed full of detailed legislation beyond Brexit. Brexit will be complicated enough.

I believe we will look back with a degree of selective memory and not see Brexit as a great revolution. It feels problematic at the moment, and I feel for the Minister for Trade and Investment, who has day-to-day responsibility for delivering Brexit. In many ways I am grateful to be on the Back Benches, having campaigned for Brexit, so that I can let him do some of the detailed lifting, but over the next 18 months I would like to do more on trade and customs-related Bills, both in the Chamber and in Committee.

My hon. Friend the Member for Stone (Sir William Cash) gave us a history lesson, but an A-level history student might be confused by some of the debates we have here. A student looking at the corn laws and gunboat diplomacy—attempts to build up trade and markets—and reading Adam Smith would see a trajectory of ever more open free trade and that being seen as a good thing, separate from capitalism and sometimes having its wings clipped. In a time of global uncertainty about quantitative easing, sub-prime lending, eurozone collapse and so on, perhaps my greatest concern is Donald Trump’s comments on trade. The big nation states, the G7 or G20, need to take responsibility and look at free trade not only for our own benefit but for the benefit of others, particularly in the Commonwealth and Africa, which I will discuss if there is time.

Since 2005, when I became an MP, the proportion of our goods exported to places outside Europe has increased from 48% to 56%. As speakers on both sides of the House have noted, the growth areas are outside the Europe Union. In an intervention on the hon. Member for Brent North (Barry Gardiner), I highlighted the fact ​that we import more than we export. Understandably, we in the UK look at Brexit from our own standpoint, because it was we who voted on it and we who wanted it as a nation, although there were clearly a lot of debates across all the parties. If we look at it more from the perspective of continental Europe—from the point of view of exporters of German BMWs, or of prosecco and champagne, which the Foreign Secretary discussed—Brexit could seem a lot closer to being delivered.

I welcome the Department’s meeting of Commonwealth Trade Ministers. I was fortunate enough to attend some of the earlier meetings. There is a real appetite for refreshing relationships with the Commonwealth. It should have been happening anyway, but Brexit gives us a further opportunity. I am glad that in Africa more generally, we are taking a step back from the European partnership agreements. I encourage the Government, especially the Department for International Trade, to pursue policies to grow countries out of poverty. That has a great impact on us by cutting migration and terrorism, as well on the people who escape poverty. To be frank, that is as important, if not more so, than getting the short-term benefit of export trade. There is a good opportunity there.

I have some concerns about how the Department is organised, at a time when the Foreign Office is joining up with the Department for International Development at ministerial level to encourage a united regional and country-by-country approach. The trade envoys will have a country approach, but Ministers are taking a more sectoral approach. When I was a banker in Ivory Coast, gold miners would come to me and ask about the country. Oil producers would ask me about the country and how easy it was to do business. Tech companies would come to me, but not to ask about technology; they would ask about regional issues and how easy it was to do business. Perhaps the Government can provide those services in the round. I would love to see more of Lord Price’s high value opportunities study, which we can really leverage. I think that the blockage in Downing Street on the trade envoys should be freed up and we should appoint more trade envoys as soon as possible.